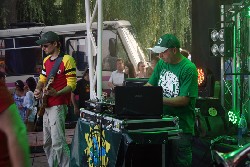 As part of the celebration of the City day of Volodymyr-Volynsk, began the XX International Youth Festival "Volodymyr 2013".  Ice cream festival, a street dance festival, a presentation of robotics models, an exhibition of scientific and technical creativity groups gathered lovers of delicacies, music and entertainment, as well as extraordinary creative personalities. A performance was organized for children: clowns, giant dolls,  sky kites, a competition of children's drawings on the asphalt was organized. the second day of the festival, July 27, ended with a dance competition, honoring the "golden" couples and the performance of the guests of the song contest. The last day of the Vladimir-2013 festival was especially busy. The last day of the Vladimir-2013 festival was especially eventful. On Sunday, July 28: exhibitions, book fair, fairy tale holiday, master class on beadwork. And at the end of the jubilee international festival the following special guests performed: Ulia Lord, band "Skryabin", "KOZAK SYSTEM", "FlyzZza", "Viskula".

ІІ Forum of Local Self-Government in Lviv
All events...
An example of a completed project: